This is a post in my organizing “between and beyond” series. Other posts are here. The purpose of this post is to provide a high level analysis of Lean Six Sigma.

The decision-making in L6S is data-driven. This is part of the long-term, cultural transformation which L6S strives for. L6S is about data! The L6S problem solving is done in five clearly defined phases (Define, Measure, Analyze, Improve, Control). The goal is to identify the most significant variables affecting the output of the process. A rule of thumb is that 85% of the variation in any process is controlled by two to five critical process input variables.

Objectives
The objectives of L6S are to:
– Identify the biggest problems
– Assign the best people to fix these problems
– Provide them with all the tools, resources and support needed
– Guranteeing them uninterrupted time to focus on permanently eliminate the problems

Incompatibilities
L6S acknowledges that the equation that relates process output to process inputs doesn’t have to be simple. Process outputs can, for example, be a function of many process input factors. Some of these factors may affect the output in a non-linear fashion. The factors can also be co-dependent. Interactions might, in other words, be going on between the variables. My question, however, is how often an equation can be determined that relates process outputs to process inputs in a business environment?

Conclusions
I used to be an authorized Personal Software Process instructor and certified Team Software Process coach, and have personal experience of using the kind of statistical process control in L6S on myself, in my projects. My conclusion is that it is only in special cases that it is possible to determine an equation that relates process outputs to process inputs. Cognitively heavy processes (that is, processes where you think a lot, like in software development) are difficult to put under statistical process control. I have tried! I don’t think my personal software process ever was under statistical control.

Related posts:
Analysis of the CMM, PSP, and TSP

Bob Emiliani is a professor of Lean Management. Here is his post on the historical parallels between Scientific Management 100 years ago and Toyota Management today.

Similarly people became aware of Toyota’s Production System (TPS) in the 1970s. Interestingly, most studied the technical aspects of TPS, but not the human aspects. Soon a small army of consultants started to sell TPS tools. TPS is seen as a production system. Yet, TPS was Toyota’s management system. In 1988, the term Lean production was introduced. This resulted in a huge army of consultants and the Lean movement was born, which implemented dilutions of TPS.

Business leaders are devoted to finding the latest tools that help them achieve short-term gains. Consultants are more than happy to help, regardless of whether the movement is called Lean, Agile, or something else.

Here are quotes of Michael M Pannwitz from an email to the World wide Open Space Technology email list June 6, 2016. (My emphasis in bold.)

I think that there is a much easier way to have the sponsor find out whether ost [Open Space Technology] fits his situation… Simply go through the preconditions for an open space event that has at its nucleus the attempt to widen the space for the forces of self[-]organisation to unfold:

In case the sponsor finds all preconditions sufficently in place I as faciliator give him all the promises we usually list. I have found this approach to entail the least amount of work for me and keeps all the responsibility where it should be, with the sponsor.

John Seddon writes about lean in his two books Freedom from Command & Control and The Whitehall Effect. He writes that the term lean was coined by Womack, Roos and Jones1 when they wrote The Machine That Changed the World. The term thus came to represent the Toyota Production System as a whole.

What’s interesting is that Taiichi Ohno, the man behind the Toyta Production System, unequivocally warned against using any kind of label on grounds that people then would view it as a ready-made package.2 Ohno counselled, never codify method, because it is the thinking that is the key.3 Ohno’s favorite word was understanding. He never explained.4 To Ohno, the approach was a way of behaving when faced with problems that needed solving.5 The point is that you can only absorb counterintuitive truths by studying and seeing them yourself.6

To sum up, the reason lean has become so popular is that it reduced the Toyota Production System to a set of tools.7 Tools can be taught and reporting can be institutionalized.8 Learning, on the other hand, requires active involvement.9

Updates 2016-06-19:
References added to Freedom from Command & Control and The Machine That Change the World.


“Indaba” (pronounced IN-DAR-BAH), comes from the Zulu and Xhosa people of southern Africa, and is used to simplify discussions between many parties.

When things got tricky at the climate-change summit in Paris, indabas where held at all hours of the day. An indaba is designed to allow each part to speak personally and state their thresholds, while also suggesting solutions to find a common ground.This Quartz article describes indabas as a way to reach consensus, but to me it sounds more like consent.

Inner bonding is a process developed by Margaret Paul and Erika Chopich for connecting our adult thoughts with the feelings of our inner child, so that we can reduce the inner conflict within ourselves. Here is a video where Margaret Paul describes the six steps of inner bonding:

Here is Penny Tompkins and James Lawley article on Less is More … The Art of Clean Language, which introduces Clean Language developed by David Grove.

Here is a TEDxMerseyside talk by Caitlin Walker on how to ask clean questions to tap into our inner intelligence. This is based on David Grove’s pioneering work in Clean Language. 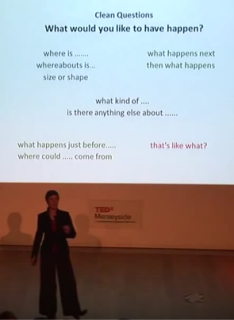 The Powers of Six is a methodology for eliciting and utilizing a person’s inner intelligence, which is driven by six conditions:

My conclusion after having read Brian Robertson’s new book on Holacracy and Gerard Endenburg’s first book on Sociocracy is that neither Holacracy nor Sociocracy replace Command & Control (C&C). Both use C&C within limits.

This triggered feedback from Holacracy people that the Lead Link Role doesn’t manage day-to-day work and doesn’t manage others, but that there is definitely control in Holacracy. All Roles “have the authority to control and regulate” their own Domains (Holacracy Constitution v4.1, 1.4 Authority Over Domains). There is definitely control in Sociocracy too.

My follow-up question is: What if control in itself is inappropriate?

Here is an interesting article on The “Command and Control” Military Gets Agile by Daniel Mezick, which contains references to writers within the military who challenge control themselves. Key points are that complex situations cannot be controlled, and control is in fact an emergent property, not an option to be selected. Here are a few quotes:

The word “control” is inappropriate … because it sends the wrong message. It implies that complex situations can be controlled, with the implication that there is the possibility of an engineering type solution. … But this is a dangerous oversimplification. The best that one can do is to create a set of conditions that improves the probability that a desirable (rather than an undesirable) outcome will occur and to change the conditions when what is expected is not occurring. Control is in fact an emergent property, not an option to be selected. … The argument that … commanders in the military or… management in industry do not have control creates cognitive dissonance. Nevertheless, this is undoubtedly the case. The widespread belief that we have control is merely an illusion, and a dangerous one at that. The literature on complex adaptive systems explains why the notion of control as a verb is misguided.1

…any Complex Adaptive System…cannot be controlled or ruled: a CAS will simply find ways of working around the rules if the context in which it formed remains viable. … The basis of these … systems of working … are based upon very simple trusts — not rules …
Essentially, the tension is … between trusts and rules.2

Attempts to control complex systems … tend to be pointless at best or destructive at worst.3

And here are quotes from some non-military references:

For life, where freedom of choice in acting exists, control and prediction is impossible, attempts to control are destructive to life and lead to chaos. … If we examine the causes of our failing institutions, it is easy to show that attempts to control them, violating normal processes of life, makes them fail.4

We talk and write about leaders and managers being in control of organizations. In the reality of our experience, however, no one can control the interplay of intentions, because they cannot control what everyone else in every other organization is choosing and doing. Consequently, no one can choose or be in control of what happens.5

For nearly three centuries we have worked diligently to structure society in accordance with that concept, believing that with ever more reductionist scientific knowledge, ever more specialization, ever more technology, ever more efficiency, ever more linear education, ever more rules and regulations, ever more hierarchal command and control, we could learn to engineer organizations in which we could pull a lever at one place, get a precise result at another, and know with certainty which lever to pull or for which result. Never mind that human beings must be made to behave as cogs and wheels in the process.6

Related posts:
The big misconception in sociocracy
Dee Hock on control
Harrison Owen on control
Fritz Perls on control
The phenomenology of sociocracy
Traditional vs. Sociocratic vs. Holacratic Command & Control
Holacracy vs. Sociocracy
Book Review: Holacracy by Brian Robertson
Book Review: Sociocracy by Gerard Endenburg
The phenomenology of sociocracy
Machines are allonomic, living organisms are autonomic
Autognomics: Radical Self-Knowing
Self-organization is the real operating system
Emergence is simply what life does
Empowerment is a red herring
Pre-conditions for self-organization
What if the organization is a living system?
Carl Rogers on person-centered leadership